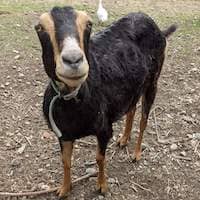 Meet Skipper! He lived with sheep for the first seven years of his life and was very lonely. Skipper cheered up when Fergus the dog and the other goats moved to the ranch in Mount Vernon where he lived. When Fergus and the other goats moved to Paradise Farm, Skipper’s owner asked us to also take care of Skipper because he was happier with them. He is a LaMancha goat which means he was born with no ear flaps making him look like a camel! Skipper is still a moody goat and often spends time by himself. However, he is always cheered up with a snack of weeds and blackberry branches!